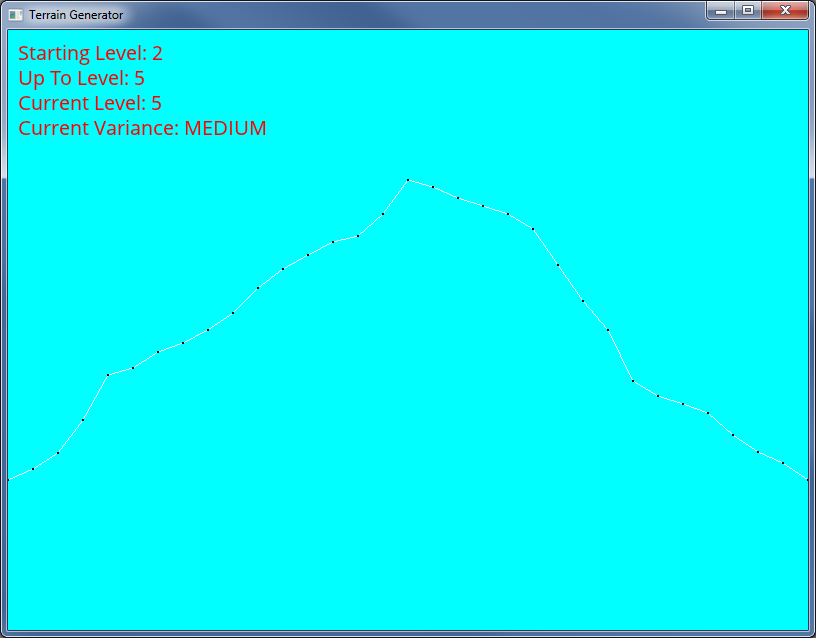 I built this while beginning to get into procedural generation. It's pretty simple and I hope to go on to make a 3D version to make terrain meshes.

Requires SFML to build. Open-sans font is included. Licence for that is in LICENCE.txt in the same folder 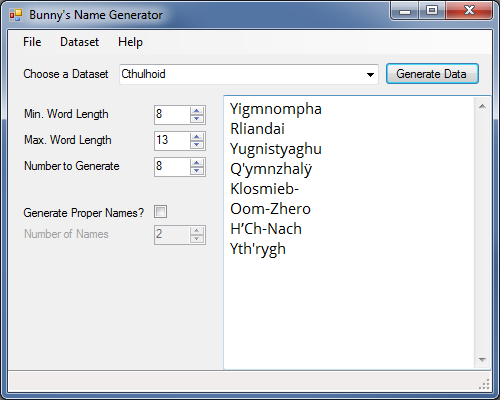 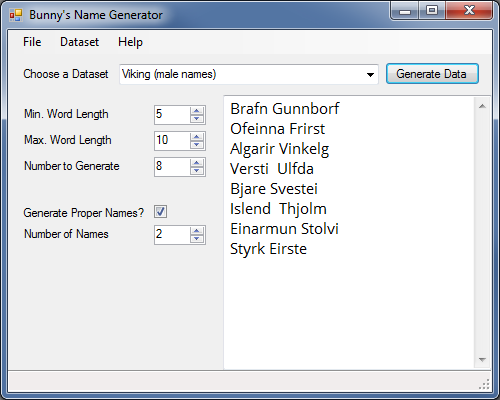 I design Magic: The Gathering cards occasionally and I found that I was mostly terrible at coming up with names for any legendary things or for organisation/kingdom/clan names. I used to use Chris Pound's site for bits and pieces but I didn't like waiting for the site to update it's list so I ported the scripts over to C# and dropped them into a simple WinForm.

Most of the datasets are from Chris Pound's site with a few added by myself. The scripts I based my work on can be found here

I am currently working on porting it to being a webapp.

Each dataset is either a simple xml file or a txt file containing all the words separated by spaces and new lines. The program currently accepts no other form of dataset.

An online version of my name generator made entirely using JS and text files. 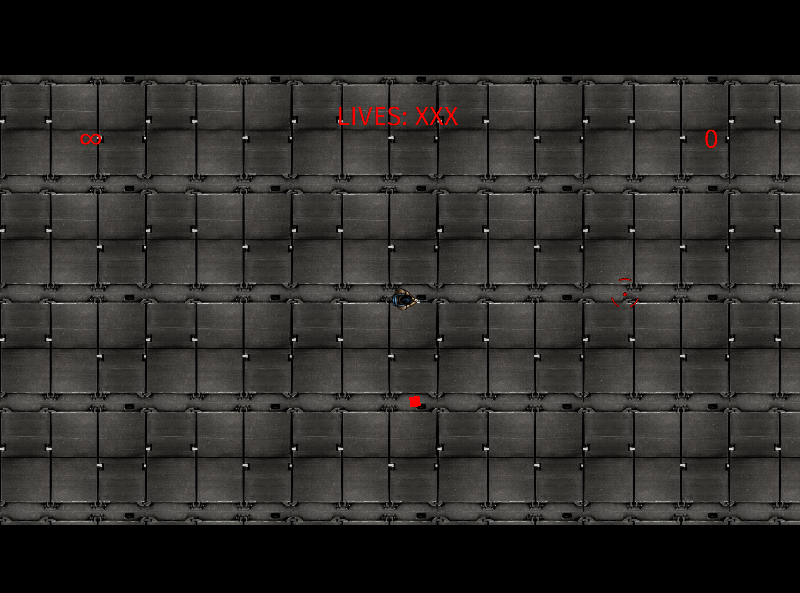 I wanted to relearn C# and build a game so I built a basic arena shooter using some public domain media from opengameart.org. It's in a final state on the code basis but eventually I plan to replace all the art and music 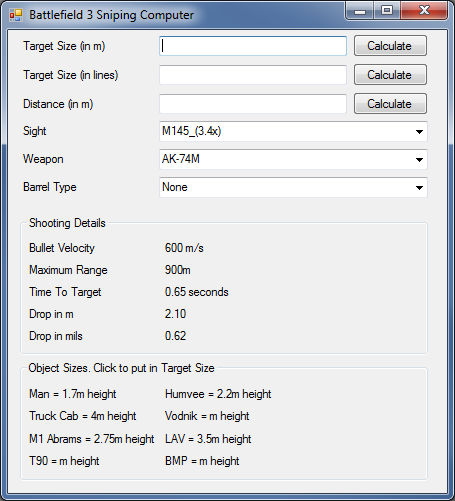 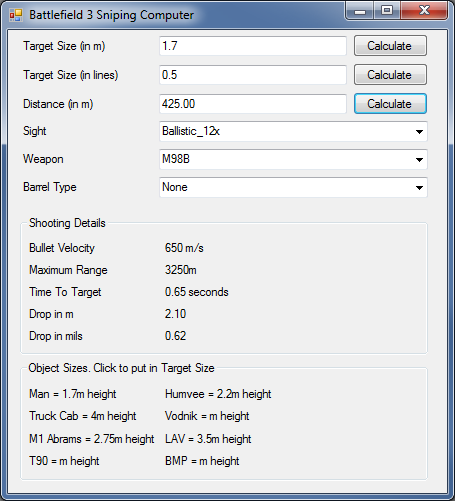 Sniping in Battlefield 3 was normally a trial and error system of tracking shots visually and correcting as I went. I got sick of that and thought there would be an easier way so I put this together using some data collected by the guys at Symthic with a bit of added research by myself.

I used this to make guesstimating the bullet drop at distance a thing of the past which made sniping douchebags at extreme range much easier. It was quite useful for the most part and interesting to research on mil dots and other such things. 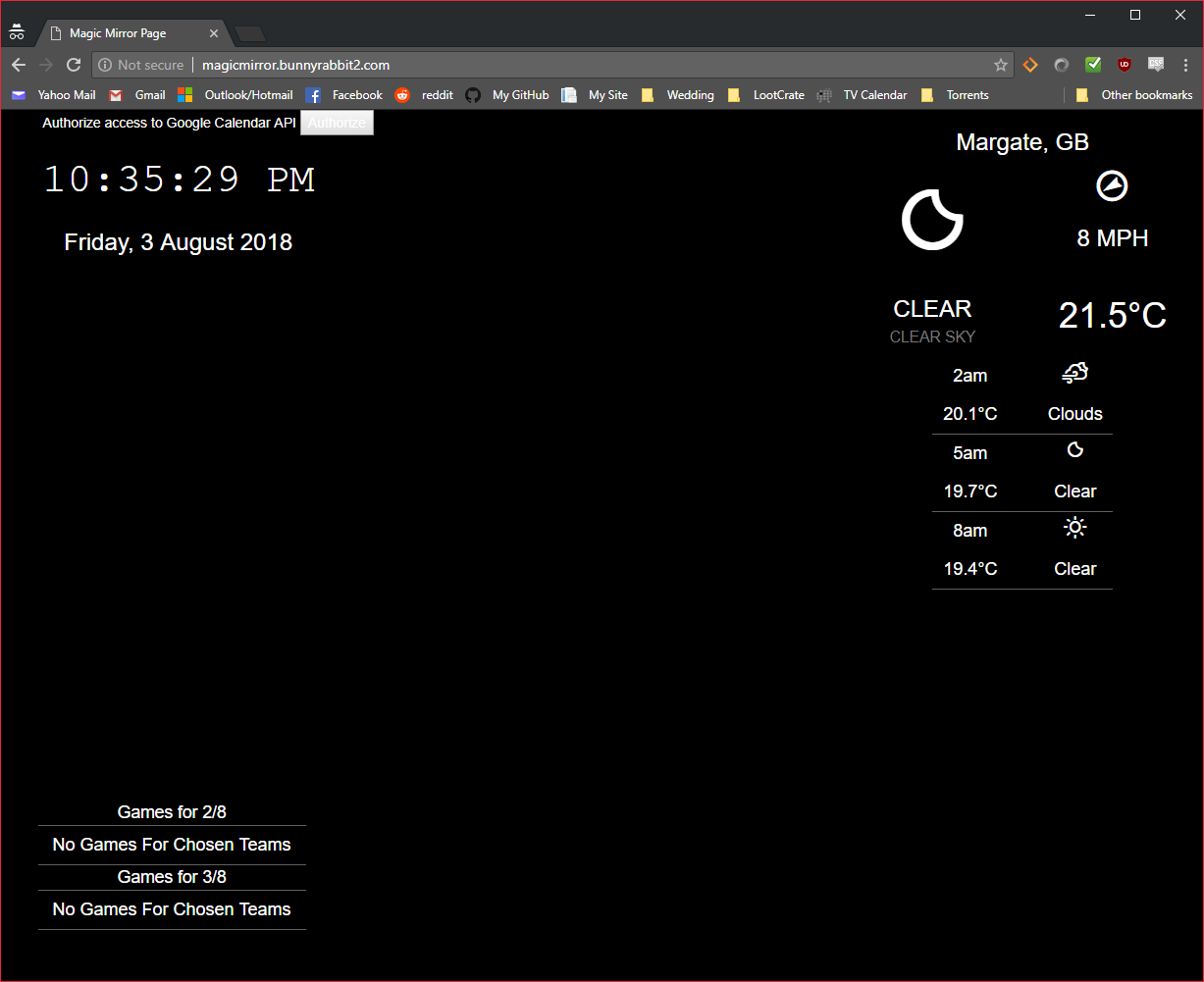 At home I have a Magic Mirror (essentially a screen displaying a web site powered by a Raspberry Pi with a two way glass mirror in front of it) and this is the website I display on it.

It shows the current date and time, weather for my home town, the scores of the NHL teams I follow and the next five items on my google calender.

I have also built a compliment/insult module that I tend to leave not activated to reduce clutter on the mirror.

I built this website to replace an old one put together using a bootstrap template. It was partly to learn Bulma and to learn SASS while also moving my site off of a template and on to something I could say I have built myself.

Using php was just a way to have the page split into multiple files without too much hassle.

In november of 2019 I was directed to the Advent of Code website and found it interesting so I decided to follow it the best I could and use it as an oppurnity to sharpen my C# skills.

Unfortunately life is far busier than I would like so I could not complete the puzzles as they were released but have been working on them when I can.

Around the time I finished day 11 I decided to start a second repo and work through the puzzles in Python as well as a learning process.

I'm a long time programmer and general tech geek. I'm passionate about all things tech and am always looking for the next thing to learn, make or do.

This site has some of my projects I've built in my free time. They are built in various languages using various frameworks and libraries and most are hosted on my github.